Observations of earthquakes and crustal deformations in sea areas

ﾂ黴Most of the huge earthquakes occur at the borders between two plates (plate boundaries) under the sea. However, because it is hard for onshore observing systems, alone which are far away from their source areas to detect those events, we've had difficulty in making an accurate understanding of the phenomena of the seismic activities and crustal movements occurring with plate subduction under the seafloor. In order to compensate the weakness of those traditional observing systems, the observation techniques of earthquakes and crustal deformations on the seafloor, immediately above the sources, have been developed, and we have been vigorously conducting the observations using those techniques.

ﾂ黴While onshore seismic observations have been conducted from a long time ago, the seafloor seismic observation has been put to practical use only recently because of its technical difficulty. Because of the severe environment with high water pressure at the deep seafloor, which is several thousand meters below the sea surface, it is necessary for us to secure sufficient water and pressure tightness of the container for storing measuring equipment and batteries. In addition, how to recover the equipment, which was installed on the seafloor, has been an issue to be solved. The development of ocean-bottom seismic observation technique started in the late 1960's, and the observation systems are now dramatically improved. There are two types of observation style: one of them is offline observation and the other is online observation using submarine cables. As for the offline stations, we go to the observation points, install the device, recover the device after the observation period in order to collect the data. On the other hand, submarine cables have enabled us to get the data online via data center directly.. Those technological developments of ocean bottom seismic network enabled us to make a precise determination of hypocenter occurring under the seafloor and to make a more accurate understanding of the shape of the plate boundary faults that cause subduction zone earthquakes. Furthermore, ocean bottom seismometers are used not only for earthquake observations but also for marine seismic surveys, which made high-accuracy estimation of seismic velocity structure under the seafloor possible. Based on these advancements, we are moving toward a deeper understanding of differences between the physical characteristic of the seismogenic zones along the trench and those of the rest.ﾂ黴

ﾂ黴On the other hand, when we try to know more about the crustal deformation including horizontal displacement on the seafloor, we cannot use conventional methods, which used on land such as a laser trilateration technique and a satellite positioning method using GPS satellites because of a large attunuance for electromagnetic wave in the ocean. Thus, we have been developing a new measurement technique, called as GPS/A seafloor geodetic observation system, which combines GPS positioning and underwater acoustic positioning (Fig. 2 left). This system enables us to determine precise locations of seafloor benchmarks by monitoring the location of the surface platform with the use of GPS satellites and measuring the distance between the surface platform and the seafloor benchmark with the use of acoustic wave at the same time. Though GPS/A observation system had been developed to a practical level in the late 1990s, with the number of researchers increased awareness of the importance of crustal deformation monitoring in the seafloor, GPS/A observations are being carried out in several different regions in recent years. With the GPS/A technique, we are becoming more able to understand the offshore seafloor deformation, which could not able to be captured by the conventional onshore observations.

ﾂ黴The 2011 Tohoku-Oki earthquake (M 9.0) was the first massive earthquake observed successfully by making use of those ocean bottom observation techniques. Our research group had already started the observation of ocean bottom crustal deformation in off Miyagi region before the occurrence of this earthquake. Based on these observation network, we observed more than 30m coseismic displacement at the benchmark in the shallower part of the plate boundary (near the trench), which has been long thought to be less likely to cause earthquakes. This result has provided a powerful clue to understand a generation process of huge earthquakes (Fig. 2 right). Furthermore, after the 2011 earthquake, we deployed additional benchmarks for measuring ocean bottom crustal deformations over a large area extending from off Ibaraki to off Aomori, and we've been continuing the careful observation. By doing this observation, we are hoping to find out at what kind places afterslips following large earthquakes occur and how the interseismic strain accumulates again toward the next interplate large earthquake. Also, we have been carrying out seismic survey using ocean bottom seismometers and an air-gun array to obtain a seismic structure around an earthquake source area, and trying to get more understanding of tectonic characteristics which caused such a mega earthquake and the following afterslips. 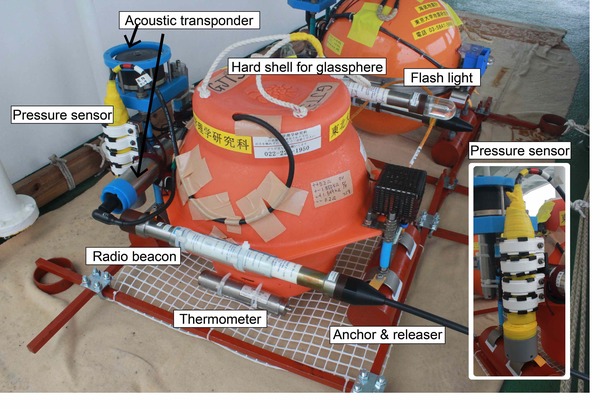 Link: Research Center for Prediction of Earthquakes and Volcanic Eruptions