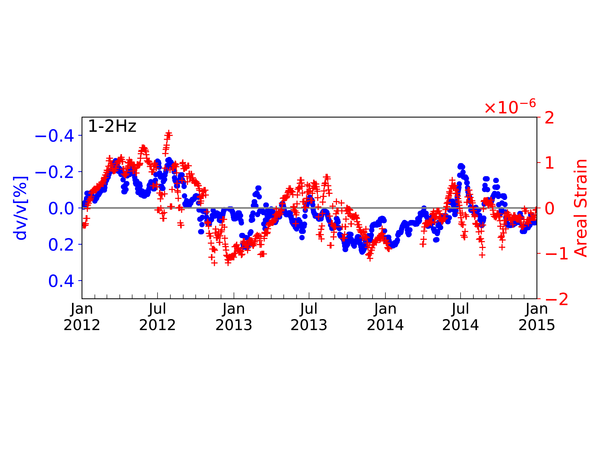 You may think that the Earth is shaking only when an earthquake is taking place. However, it is not true. The Earth is shaking faintly without no earthquakes. Such ground motion is called seismic ambient noise, and is caused by not only natural phenomena such as ocean swells and winds but also human activities such as working factories and traffics. Our solid Earth physics laboratory is now trying to monitor the status of earthquake faults and volcanoes by using seismic ambient noise.

Based on seismic interferometry, you can monitor the status of the Earth's interior by calculating cross correlation functions of ambient noise every day and investigating their phase arrival times and waveforms. The bottom figure shows results of seismic interferometry at Sakurajima volcano, Japan, by using seismograms obtained by Japan Meteorological Agency (JMA) during 2012-2014. Seismic velocity (shown by blue) changes annually with the smallest value in spring and the largest in fall. In order to interpret the result, we calculated areal strain (crustal deformation) from observed GNSS data by Geospatial Information Authority of Japan (GSI). A good correlation is found for these two kinds of the results: low seismic velocity for dilatation and high seismic velocity for contraction. Stress changes in the volcano can be detected as changes in seismic velocity. So far, no precursory changes have been detected at Sakurajima. But precursory changes have been reported for other volcanoes such as Reunion Island. Therefore, we are now trying to utilize seismic interferometry for forecasting volcanic eruptions in Japan.

(by Hisashi Nakahara and Takeshi Nishimura)