Why are the seismicities so active in the plate subduction zones? 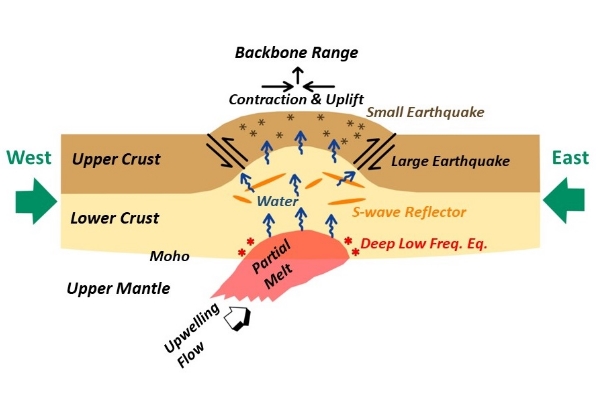 Japan occupies only 0.25% of the area in the world, but 20% of earthquakes in the world are occurring in Japan. The reason of this high seismicity is usually explained by the plate-to-plate interaction because four plates collide with each other in and around the Japanese islands. But is it the only reason why the seismicity is so high there?

It is easy to understand that the seismicity is high along the boundary between the land plate and the descending oceanic plate. However, the reasons why the seismicity is also active in the inland area and within the subducting plate are not so evident.

An earthquake can occur when the stress at a fault exceeds the strength of the fault. Because the seismic activity is quite inhomogeneous, there must be some mechanisms of stress concentration and/or strength reduction. In order to understand the earthquake generation mechanism, it is important to know the underground structure in detail.

In the medical area, the CT (Computed Tomography) using X-rays or ultrasonic waves is very popular. In seismology, we apply nearly the same technique using seismic waves to the earth. Figure 1 shows a cross section of the NE Japan subduction zone estimated using the seismic tomography. Blue and red parts respectively indicate the regions where the seismic-wave propagating speed is high and low, which respectively correspond to hard and soft parts in the earth. The white circles indicate the hypocenter distribution of the earthquakes. The subducting Pacific plate is clearly shown as a blue area, and a red area above the plate continued to the region below the volcanoes. In this red area, the attenuation of seismic waves is also prominent. From these observations, the red area is interpreted as a region where the rock melts partially generating magma. However, the rock cannot melt under such temperature-pressure conditions without water. Therefore, water must be supplied to the red area from the subducting Pacific plate.

The generated magma rises and eventually reaches the Moho discontinuity. This situation is shown in Figure 2. The magma gradually cools and solidifies partially. Then the water contained in the magma is released and rises towards the ground surface as indicated by blue wavy arrows in Figure 2. The heat and water coming from the magma soften the lower crust, concentrating the strain there. Since the upper crust just above it is brittle and elastic, the stress in the upper crust is also concentrated there. Therefore, earthquakes are likely to occur there. This is the model proposed by Tohoku University in order to explain the inland earthquake generation in the NE Japan subduction zone.

Until about 10 years ago we thought that the stress concentration was the main cause of inland earthquakes. According to this model, the seismicity is expected to decrease when the EW compressional stress is weakened. Due to the 2011 Tohoku-oki earthquake, the EW compressional stress was relaxed but some places in the Tohoku district showed increase in the seismicity after the earthquake. Such increase in the seismicity cannot be explained by the stress concentration model. On the other hand, we have accumulated the data indicating the strength of the faults were weaker than we expected. From these observations, we are now suspecting that the spatiotemporal variation in the strength is more responsible for the seismicity than the variation of the stress.

The cause of such a spatiotemporal variation of the strength is not clear yet, but the water indicated by the blue wavy arrows in Figure 2 can lower the strength. Water rises from the deep to shallow due to the pressure gradient of the surrounding rock. Since the pressure gradient in the water is lower than the rock, the water pressure is expected to become very high compared to the surrounding rock in the shallower part. If such high-pressure water intrudes within a fault, the fault will become slippery. This can be explained by using "a cup on a wet tray" analogy: If you put a cup onto a tilted wet tray and pour hot water into the cup, the air between the cup and tray will expand and the cup will eventually start to slip along the tray. According to this theory, the reason why the seismicity in the subduction zones are so high is because a lot of high-pressure water is supplied from the descending oceanic plates.

In order to verify this hypothesis, we had deployed 50 temporary seismic observation stations around Naruko since 2010 and the results from the researches using these data supported the hypothesis. Furthermore, recent studies by various institutes including Tohoku University show that the high-pressure water is probably responsible for all the earthquakes occurring along the plate boundaries and within the subducting oceanic plates as well as in inland areas.

Since 2015 we have deployed 80 temporary seismic observation stations in Akita prefecture and around the border between Yamagata and Fukushima prefectures where seismic activity has been increased after the 2011 Tohoku-oki earthquake. By analyzing these data, we expect to elucidate the cause of the increase in seismic activity under the weakened EW compressional stress, and quantitatively estimate the strength of the faults generating the earthquakes. 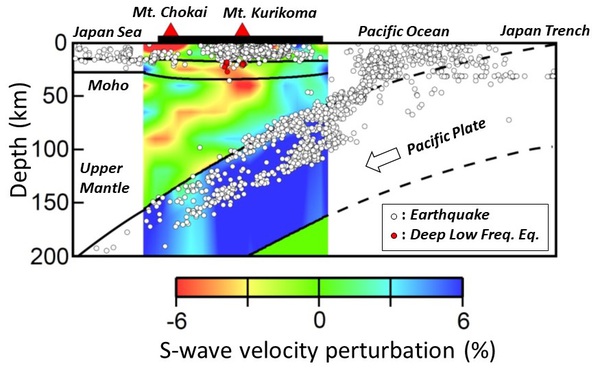 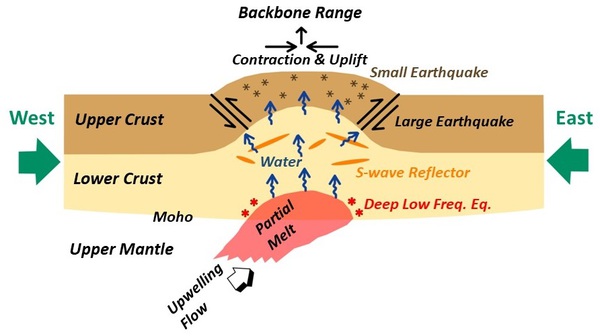