ﾂ黴Japan lies along the western edge of the Ring of Fire, and one of the most volcanically active countries in the world. About 10 % of the world's active volcanoes are concentrated ﾂ黴in Japan. These volcanoes are manifestation of the motions of the plates subducting beneath the Japanese islands. At Research Center for Prediction of Earthquakes and Volcanic Eruptions, we are conducting observations and research on seismic activities, crustal deformations, and geomagnetism at active volcanoes in Northeastern Japan, in order to identify the origin of volcanoes at subduction zones and to gain a further understanding of volcanic phenomena and changes in underground magma and hydrothermal activities.

ﾂ黴Northeastern Japan is located in a typical subduction zone where the Pacific plate subducts under the Japanese islands. Volcanic eruptions are caused by magma, which is generated when water in the subducting oceanic crust is transported to deep mantle of the earth and dehydration and partial melting occur in the mantle wedge. Magma has risen toward the Earth's surface because it was less dense than the surrounding mantles and crusts, and has formed volcanoes over a long period of time. In recent years, understanding of magma genesis, magma accumulation, and mechanism of magma ascent associated with those long-term cyclical activities of the earth has improved remarkably due to the development of the methods for estimating seismic velocity structures and electrical conductivity structures.

ﾂ黴While at the same time, we have not fully understood about the relationship between large earthquakes caused by subducting plates and magma activities and about magma ascent in the crust on a shorter time scale. Therefore, advancement of research on volcanic activities in Northeastern Japan after 2011 Off The Pacific Coast of Tohoku Earthquake (M9.0) is critical for understanding the changes in volcanic activities geophysically and mitigating volcanic disasters. 2011 Tohoku earthquake caused large crustal deformations and significant changes in the stress field extensively, and increased seismic and fumarolic activities have been reported at active volcanoes around the country. Mt. Zao is one of those active volcanoes. Although deep-low-frequency earthquakes with depths ranging 20 -35 km, which are thought to be caused by the separation of volatile components in magma and the solidification of a molten magma, have been occurring just beneath Mt. Zao before 2011 Tohoku earthquake (Fig. 1), they have been occurring with increased frequency after 2012 and they remain active. Following the increase of the deep-low-frequency earthquakes, since January 2013, volcanic tremors and long-period earthquakes have begun to be intermittently observed at shallow parts of the volcano (to a depth of 3 km) (Fig. 2).

ﾂ黴In the light of these facts, in order to reveal the distribution and the behavior of magma and hot liquid just beneath Mt. Zao, our research center has been working on enhancement of the observation network. In addition to the permanent stations we deployed in 1990s, we have installed temporary stations to observe earthquakes, crustal deformations, GNSS, and geomagnetic total intensity. As a result, we found out that there was a hydrothermal system in the form of fracture zone connecting Okama crater lake and fumarolic area (which lies to the east of Okama) in the shallower part than 3 km depth where volcanic tremors and long-period earthquakes have been occurring and that thermal demagnetization associated with rise in ground temperature was occurring around the hydrothermal system. Moreover, our detailed analysis of the observed crustal deformations revealed that the slight inflation of the volcanic edifice occurred in the first half of 2015, and the result of analysis also suggested magma accumulation at a depth of 5 km below ground. Additionally, in order to obtain basic data on the volcanic structure of Mt. Zao which is essential for a better understanding of its volcanic activities, we conducted an explosion seismic experiment in collaboration with researchers from universities around the country, in the fall of 2015 (Fig. 3).

ﾂ黴ﾂ黴In response to growing concern about a possible phreatic/hydrothermal eruption of Mt. Zao, we have been trying to get a clearer picture of the underground hydrothermal system which is the cause of a steam eruption by improving the volcanic observation system and accumulating fundamental data as described above so that we can contribute to prediction of volcanic eruptions and volcanic disaster mitigation. 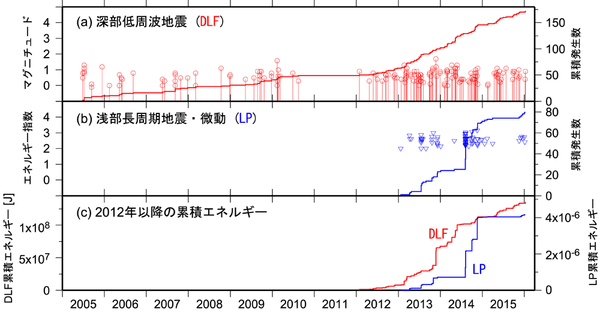 In October 2015, 150 temporary seismic stations (red circles) around the summit were installed, and underground blasts at 2 shot points (S1, S2) and a quarry blast (Sx) were conducted for dense seismic observation.