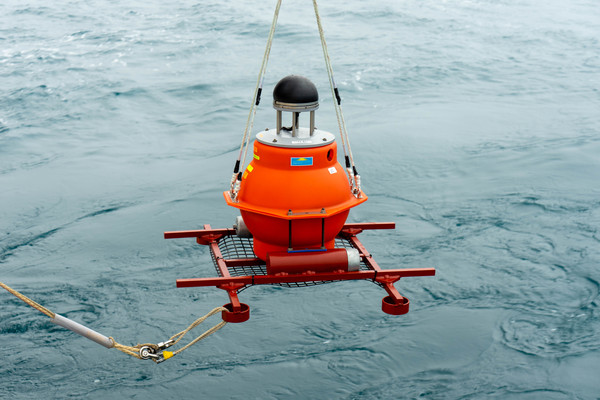 Figure 1. Installation of the transponder for the GNSS-A observation.

What is the characteristic of the past huge interplate earthquakes in the southern Kuril Trench? For example, the 2011 Tohoku-Oki earthquake (Mw9.0) had a large coseismic slip in the shallower part of the plate interface which was investigated by the sea-floor geodetic observation such as the GNSS (Global Navigation Satellite System) -Acoustic and the ocean bottom pressure measurement (see also the past topic #6). Ioki and Tanioka (2016) suggested that the last huge interplate earthquake along the southern Kuril Trench, which may occur 17th century, had a large coseimsic slip in the shallower portion in the plate interface based on the tsunami simulation with the distribution of the tsunami deposit (here after, we call this event as "17th century event"). In contrast, it is difficult to estimate the actual strain accumulation in such portion because the lack of the observation network in the offshore region.

Based on these backgrounds, Tohoku University (Graduate School of Science, and International Research Institute of Disaster Science) and Hokkaido University jointly constructed the multiple sea-floor geodetic network in the Nemuro-Oki region on July 2019 to investigate the strain accumulation process in this region. Figure 2 shows the site map of the newly constructed sea-floor geodetic network in the Nemuro-Oki region. We installed three GNSS-A sites along the dip direction of the subducting plate which denoted as G21, G22 and G23. Each GNSS-A site consistent with the three or four mirror transponders (Figure 1) for the acoustic ranging. We also install three ADMs (Acoustic Distance Measurement) equipment to measure the distance directly between the incoming plate and the continental plate (denoted as N-ADM). In the Figure 1, we also represent the three rectangular which denotes the proposed coseismic fault model for the 17th century event by Ioki and Tanioka (2016). The shallowest portion, which denoted as "S", represents the large coseismic slip region. Our G22 site just locates this region. If the shallowest portion of the plate interface accumulates the stress, we may be able to observe the equivalent displacement in the G22 site. We also installed the five ocean bottom seismometers array in the most western part of the estimated coseismic fault of the 17th century event.

We will continue the observation to investigate the spatial and temporal strain accumulation process in this region which may contribute to the hazard mitigation for the next large earthquake. 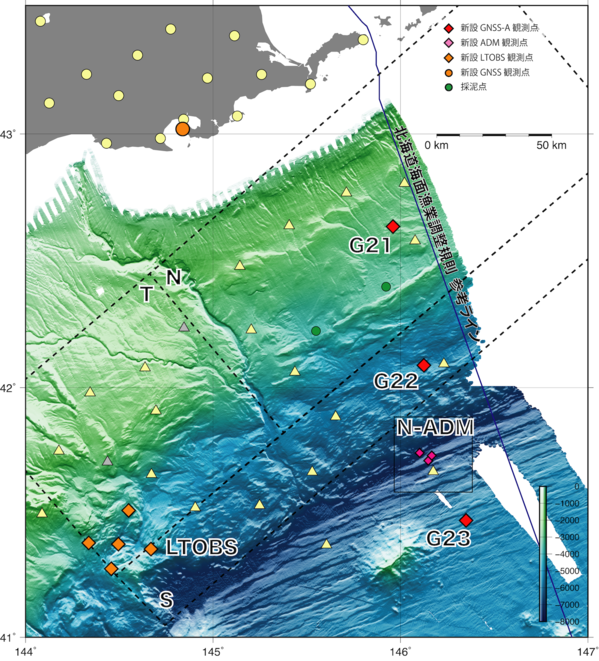