The beautiful story between the ocean and atmosphere 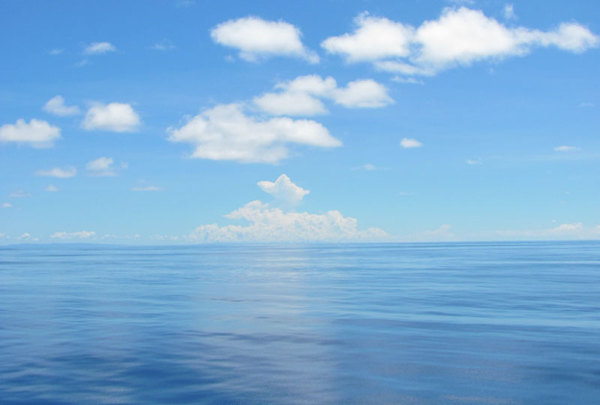 Figure 1 A photo in the North Pacific.

Numerous climate scientists have undertaken the challenge to reveal the heat exchange processes between the ocean and atmosphere. They suggested that the atmosphere drives the heat exchange in mid- and high-latitude regions, such as where we live in Japan. That is, in mid- and high-latitude oceans, strong winds on the sea surface enhance heat release from the ocean, resulting in a cooling of the waters. Put simply, this is the same mechanism as "blowing on hot tea to cool it". But recently, an increase of available ocean and atmosphere datasets (e.g., satellite-derived data with high spatial and temporal resolutions) has provided us with a new perspective of the ocean-atmosphere relationship. I will elaborate a new viewpoint/process/assessment of the ocean and atmosphere off the east coast of Japan, close to Tohoku University.

Does the warm eddy influence the overlying atmosphere? To address this question, let's consider the ocean-atmosphere heat exchange (middle panel of Fig. 3). The warm eddy released a huge amount of heat, exceeding 600 W/m2. This release was one of the largest in the world's oceans. Furthermore, surface winds were enhanced over the warm eddy (right panel of Fig. 3). The series of features indicated, "the warm surface waters enhance upward heat release, leading to enhanced surface winds" over the warm eddies off the east coast of Japan. This differs greatly from the heat exchange outlined in the second paragraph; strong winds on the sea surface enhance a heat release from the ocean, resulting in ocean cooling.

In current climate science, various ocean-atmosphere relationships among regions, seasons, and various temporal-spatial scales are starting to become clear when considering heat exchange. Each story between the ocean and atmosphere represents beauty of nature. An understanding of the complicated global climate system can be obtained by combing these stories of the ocean and atmosphere.

Every year our laboratory performs ocean observations by research vessel. Over the sea, you experience a wonderful side of nature that you normally never get to see. Wouldn't you like to have an adventure in oceans and try climate science to discover the beauty of nature? We are looking forward to young people taking up this challenge.