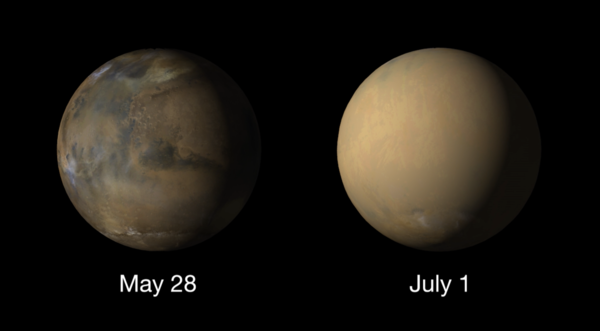 Why Mars? Mars is the most accessible planet in the universe. It is believed that Mars underwent drastic climate change, changing its environment from warm and wet to cold and dry. This gives rise to the idea that Mars may have hosted life in the past, and indeed, may do so even today. Evolution of Mars is thus an important to understanding the habitability of the terrestrial planets. The question "why and when did they diverge?" is essential for environment is involved and on that create and keep life depends.

The atmospheric environment of current-day Mars is far from habitable. The air pressure, 6 mbar, is less than 1% of that on Earth. The temperature is usually well below the freezing point of water, with an overall average of about -58 deg (215 K). On Mars, dust is a ubiquitous component in the atmosphere. Dust particles have a strong effect on circulation patterns via their greenhouse effect on the atmospheric background.

One of the most significant features in the Martian atmosphere is the dust storm, starting from the small-scale dust devils growing up to planet-encircling dust storm events. Once it starts, the floating dust covers the whole atmosphere for a couple of months and lifts a huge amount of dust into the atmosphere. However, existing spacecraft in the polar orbits cannot track the dust storm phenomena continuously in a short-time scale to clarify its evolution. Japanese future Mars mission, Mars Moon eXploration (MMX), will allow creation of a long-duration monitoring of Martian atmosphere from the equatorial orbital view (in the quasi-satellite orbit). This unique mission will enable us to track individual storms, clouds, and water vapor continuously which has never been done before.

The thick dust layer blocks sunlight from reaching the surface and absorbs the solar radiation, which directly heats the atmosphere up to several tens of K. In contrast, the surface temperature falls down due to the shield of dust. Such a drastic change in the thermal structure is expected to induce significant modulation in the atmospheric dynamics and the chemistry. Recent studies highlight that the dust storms effectively transport water vapor from the near-surface to the middle atmosphere and increase the escape rate of atmospheric water loss in a time-scale of weeks to months. It is remarkable aspect that on Mars the lower atmospheric phenomena can have on the atmospheric loss and its evolution.

Currently, a very strong dust storm has been developed on Mars for the first time after previous one in 2007. This is a rare opportunity to observe drastic changes in the Martian atmosphere under such a strong dust storm. This biggest type of phenomenon in the environment of modern Mars could be examined as never before possible, using the combination of spacecraft now at Mars by US and Europe.

A link between water vapor in the lower atmosphere and escape of hydrogen from the top of the atmosphere is an issue to understanding the mechanisms and physical processes to transport dust and water into the upper atmosphere. Yet, very limited observations have been done for the middle atmospheric region. We have performed the ground-based Mars observations for this aim by using ALMA, and our dedicated telescope in Hawaii. Mars observations by our telescope at the top of Mt. Haleakala, Hawaii, has been continuously monitored Martian mesosphere by taking advantage of dedicated use. The ground-based observations are expected to support space-born mission and provide continuous global information to investigate the evolution of global dust storm and its effect on the background.