The study of ocean ventilation and the Argo Program

The ocean covers 70% of the Earth's surface with an average depth of nearly 3,800m. The ocean's heat capacity is about 1,000 times larger than that of the atmosphere. The ocean thus plays a crucial role in the climate system. In the context of the global warming issue, it was recently found that the ocean stored more than 90% of the energy accumulated between 1971 and 2010 in the climate system, which exemplifies how critical the ocean's role is. Physical Oceanography Laboratory has been conducting research on various aspects of the ocean as an essential component of the climate system.

The ocean exchanges heat, water and various substances, including CO2, with the atmosphere. The part of the ocean that is directly related to the exchange is surface mixed layer. The mixed layer is developed to the greatest depth in winter, when the near surface density stratification often becomes unstable due to surface cooling. In the North Pacific, for example, the deepest wintertime mixed layer reaches to 300 m or deeper and thus the impact of heat, fresh water and other dissolved substances brought from the atmosphere does so. However, the mixed layer reaching to such great depth is developed only in the limited area. Furthermore, "such great depth" is in fact merely near the surface of the whole water column. In the layer below the mixed layer base, the stratification is essentially stable and thus vertical exchange of heat and other substances is fairly limited.

"Ventilation" is the process that the heat, fresh water and substances brought from the atmosphere at the sea surface are carried into the ocean. While the development of the mixed layer contributes to the ventilation, it is not the whole story of the ventilation of the ocean. Understanding of the ventilation is one of fundamental and critical problems of ocean science, which we have been working on for a long time.

Observations of temperature and salinity inside the ocean are essential to study the ocean ventilation. Since remote sensing with electromagnetic waves does little in the ocean, the observations have been largely depending on ship-based measurements from the beginning of the modern oceanography in the 19th century. However, the ship-based measurements consuming huge amount of cost and time provide only limited coverage of data in temporal and spatial domains, which is not sufficient for many purposes. There had been large data gap especially over remote oceans in the Southern Hemisphere and stormy wintertime oceans until the end of the 20th century.

The situation of insufficient data coverage has been drastically improved by the international ocean observation program, Argo launched in 2000. The Argo Program is to aim to observe the global ocean homogeneously in time and space by deploying large number of profiling floats that autonomously measure the ocean. Japan has been a major contributor to this program through the collaboration between Japan Agency for Marine Science and Technology (JAMSTEC) and Japan Meteorological Agency (JMA) with supports from relevant governmental ministries and universities. Our laboratory has been participating in the Argo Program from its beginning. The Argo array of more than 3900 floats over the global ocean is currently maintained by over 30 participating countries. Each float makes a profile measurement of temperature and salinity from 2000-m depth to the surface every 10 days. The data are transmitted to satellites and open to the public through internet within 24 hours. The Argo Program is recognized as a revolution of the ocean observation.ﾂ黴

Our research on the ocean ventilation has been progressed significantly owing to the Argo data. Subduction is a process that water in the mixed layer sinks into the deeper layer along an isopycnal surface, which plays an essential role in ventilating the upper kilometer of the ocean. Quantification of the subduction requires information of density filed in the ocean. Because of limitation of data availability, what we could do was to estimate the climatological annual subduction rate based on the averaged filed over several decades. We can now estimate the annual subduction rate each year to reveal its year-to-year variation. We are now conducting analyses to understand impacts of the variations in the subduction rate on distribution of heat and dissolved substances in the ocean. 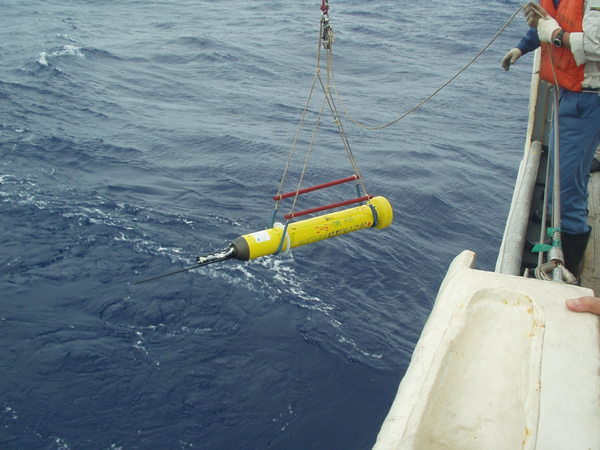 An Argo float to deployed in the North Pacific 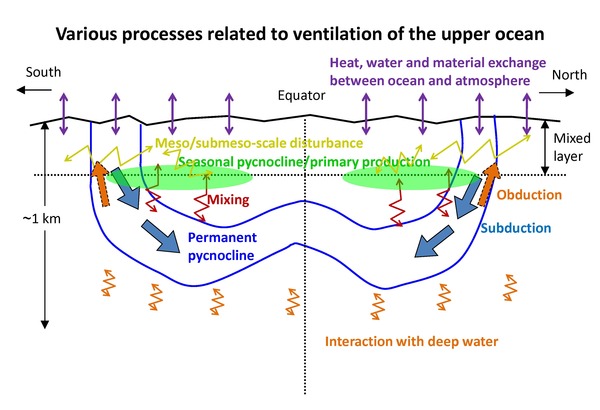 Schematics of the upper ocean ventilation 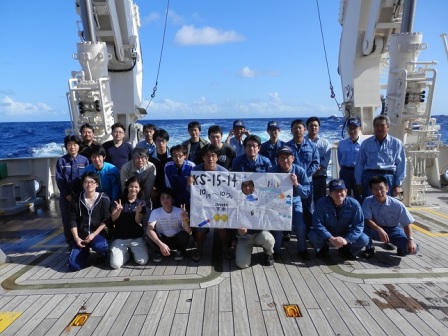 A group photo of participants in Shinsei-Maru KS-15-14