Data assimilation for understanding and predicting seismic and volcanic phenomena 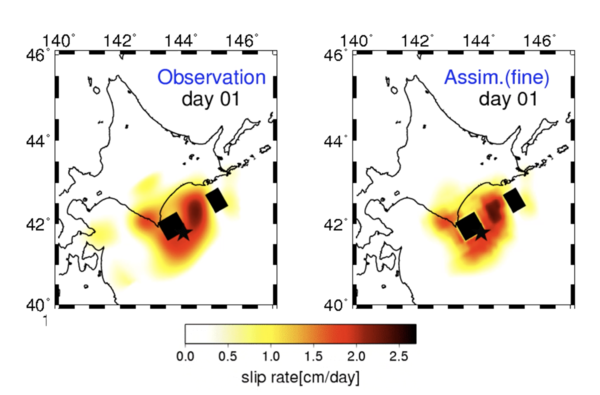 The recent development of dense seismic and geodetic observation networks has contributed to observe crustal movements with a wide variety of time constants ranging from strong shaking to slow transient deformation with high resolution in both time and space. On the other hand, high-performance computing enables to reproduce seismic and volcanic phenomena such as seismic wave propagation and volcanic eruption with high-fidelity by numerically solving the physics-based equation. As a next step for further understanding seismic and volcanic phenomena, it is important to develop new methods to combine both advantages of a large amount of observation data and large-scale numerical simulation. 'Data assimilation' can appropriately extract information from both observation data and physics-based numerical simulation based on Bayesian statistics.

Data assimilation has recently been introduced in the field of solid earth sciences to estimate seismic wavefield, physical parameters inside volcanoes, and to predict ground motions and tsunami arrivals. Here, we introduce an example of research which attempts to understand physical properties on the plate interface and predict fault slip evolution from GPS data using data assimilation.

Afterslip is a slow fault slip on the plate interface, lasting for months to years following large earthquakes. Afterslip itself does not cause any disasters, but propagation of afterslip results in stress changes along the plate interface leading to trigger another large earthquake. Therefore, it is important to monitor the current afterslip distribution based on GPS data, and to predict afterslip evolution through numerical simulations.

Temporal evolution of afterslip for 15 days following the mainshock was well reproduced by optimizing the frictional parameters using GPS data (Figure 1), indicating that the developed method is capable of reproducing the observed afterslip up to the date when GPS data is obtained. Then, the temporal evolution of afterslip for the following 15 days was predicted using the optimized parameters, and the predicted afterslip was well comparable to the test data. By further developing this method, in the future, it is expected to establish a system for real-time monitoring of fault slip on the plate interface, leading to quantitatively predict an evolution of fault slip and stress perturbation in the adjacent fault region.

Data assimilation is widely utilized in the field of meteorology and benefits our life through weather forecasting. We are now developing a monitoring system on the plate interface towards an extreme goal of numerical forecasting of fault slip.