Theoretical and computational study of plasma heating in astrophysical turbulence 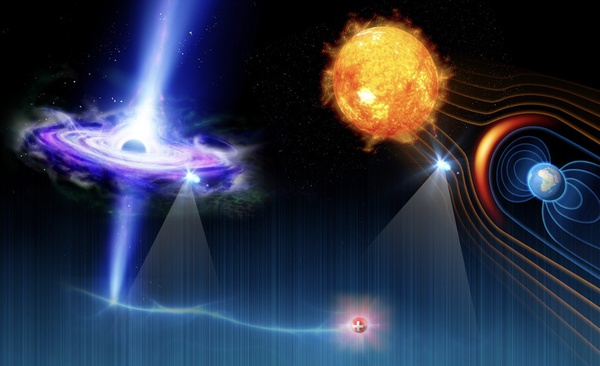 Turbulence is a phenomenon in which vortices of various sizes collide, merge, and break up in a complex motion. Turbulence exists everywhere in the flow of air and water around us. However, because of its extremely complex behavior, it is very difficult to understand the physical properties of turbulence. The well-known physicist, Richard Feynman, called turbulence the most important unsolved problem of classical physics. Not just in our surroundings, most of space plasmas are also turbulent. Since plasma interacts with electromagnetic fields, its motion is much more complex than that of water or air. Turbulence becomes even more complicated in space. Therefore, understanding the fundamental properties of plasma turbulence is one of the most difficult challenges in understanding various astronomical phenomena.

One of the important properties of turbulence is that it heats the plasma. In turbulence, large vortices are created by the free energy of the system (e.g. gravitational potential). Then, the large vortices break up into smaller and smaller vortices, which eventually transform into thermal energy of particles. In other words, turbulence acts as a "converter" that transforms the free energy existing in a large scale into microscopic thermal energy. For this reason, it is possible to think that the performance of turbulence as an energy converter determines how hot a plasma can be in space.

However, as mentioned earlier, the behavior of turbulence is complex, and the nature of turbulence as an energy convertor is shrouded in mystery. In particular, the question of whether turbulence heats ions or electrons more is a major problem in astrophysics that has remained unsolved for more than several decades, and is still being studied competitively around the world.

Specifically, satellite observations have shown that ions are hotter than electrons in the solar wind blowing from the sun. Looking at more distant astronomical objects, it is believed that ions are often hotter than electrons in the accretion disk ― ﾂ黴a plasma flow orbiting a black hole. In both cases, it has been expected that turbulence selectively heats the ions.

We are studying how turbulence heats the plasma using theoretical and numerical approaches. The equations describing the space plasma turbulence include various effects, which make it difficult to analyze them as they are. Therefore, we use a model called gyrokinetics, which is widely used in the studies of magnetic confinement nuclear fusion. Charged particles such as ions and electrons can be decomposed into cyclotron motion, which is fast rotation around a magnetic field, and drift motion, which is slow crossing of magnetic field lines. In gyrokinetics, the equations are simplified by averaging out the fast cyclotron motion. This means that the equations can be streamlined by focusing on the part of the plasma turbulence that is considered essential.

By using gyrokinetics, the equations become easier to handle. However, since the equations of gyrokinetics are nonlinear partial differential equations, it is difficult to solve them with only a pen and paper calculation. Thus, we used supercomputers to numerically solve the gyrokinetic equations and simulate plasma turbulence. By doing so, we investigated whether ions or electrons are heated more selectively. We found that the ion-to-electron heating ratio is an increasing function of the ratio of the plasma pressure to the magnetic field pressure, called a beta value (Kawazura et al., PNAS 2019). This means that electrons are more likely to be heated when the magnetic field is stronger, and conversely, ions are more likely to be heated where the magnetic field is weaker.

Currently, in order to clarify the nature of turbulent heating in more realistic astronomical situations, we are trying to combine these results with the driving process of turbulence at macroscopic scales. 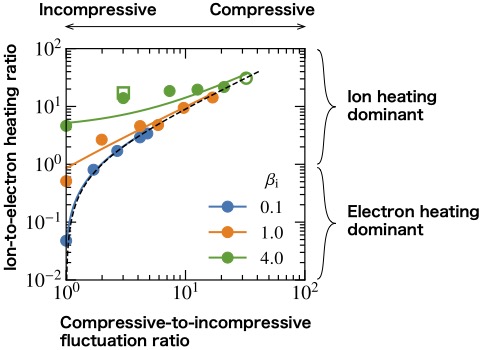