The progress of the satellite sea surface temperature observation 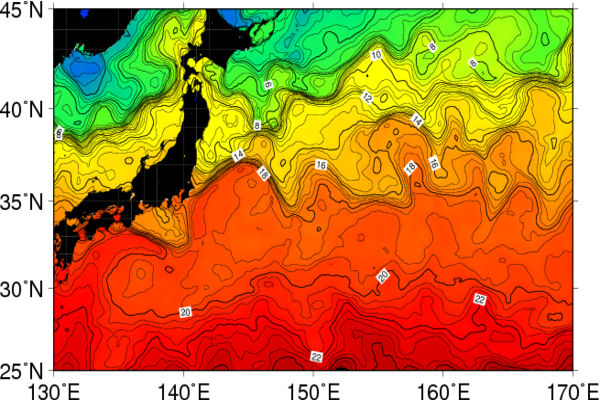 A water temperature measured at near sea surface is called as "sea surface temperature (SST)". ﾂ黴The above image is an example of SST map around Japan. ﾂ黴SST represents the thermal state of the upper ocean and it is used asﾂ黴an index of the climate change. ﾂ黴SST is a boundary condition in a numerical model for weather prediction. ﾂ黴The fine map of SST distribution is also available for finding eddies and currents in the ocean.

SST is not uniform and not steady. ﾂ黴Therefore we need the data assemled from all corners of the world by the repeated observation. ﾂ黴Remote sensing by artificial satellites is the most effective tool to collect SST data. ﾂ黴 It is because that the mobility of satellite is superior to that of in-situ observation objects, such as ships and buoys.

Around 2000s, the microwave SST observation has started into practical operation. ﾂ黴The representative sensor is the Advanced Microwave Scanning Radiometer (AMSR) developed in Japan. ﾂ黴The AMSR-E aboard the US's Aqua satellite had observed SST from 2002 to 2011. At present, the AMSR2 aboard the Japanese satellite "Shizuku" (Global Change Observation Mission-Water, GCOM-W) has made the microwave SST observation.

Today, a system works to observe global SST daily, with the spatial resolution of 1 to 50km, by the merging technique to SSTs from the in-situ observation and satellite infrared and microwave observation. ﾂ黴 In the near future, a close observation by the new generation sensors/satellites will be made. ﾂ黴For example, the Advanced Himawari Imager (AHI) / Himawari-8 has made a full disk observation with a 10-minutes interval. ﾂ黴JAXA (Japan Aerospace Exploration Agency) has a new operation plan of the S-GLobal Imager(GLI)/GCOM-Climate (GCOM-C), which will observe SST with a spatial resolution of 250-500m. ﾂ黴It must be that such new comers will make a large contribution to the study of the ocean, especially the research of the small scale and/or rapid changed phenomena in the ocean. 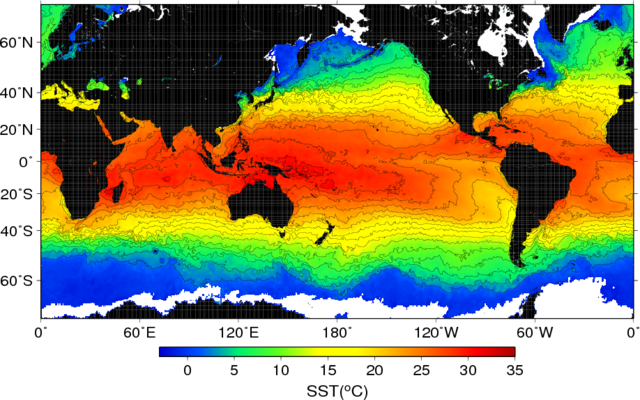 The image of the "foundation SST", which is the merged SST after the application of the diurnal variation correction, produced in the CAOS, Tohoku University. ﾂ黴The date is January 1, 2014. ﾂ黴The opening image of SST around Japan is produced from the same data.

The images of Himawari-8 Band-13 infrared observation. ﾂ黴The SST variations from 09 to 21UTC of March 26, 2015 are shown at the ocean off Tohoku Area.ﾂ黴