Habitable Environments at Icy Moons in the Jupiter System

Final goal of our Planetary and Space Physics Group is to universally understand the systems that is composed of planets, moons, and ambient space as habitable environments. Especially I have an extreme interest in the Jupiter system composed of the gas giant Jupiter and huge number of characteristic moons. The icy moons Europa and Ganymede potentially have the subsurface liquid water ocean within their solid bodies. However, the natures of habitable environment like the age of subsurface ocean and energy source for the potential extraterrestrial life are unsolved big problems. 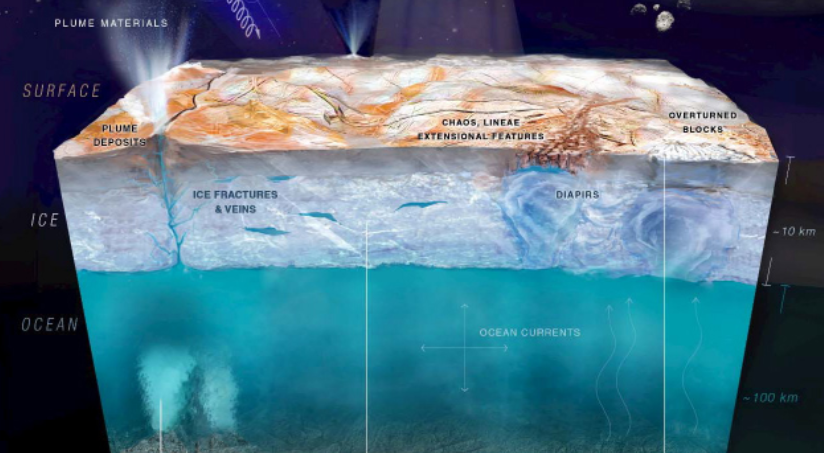 In 2030s, we are going to explore Jovian icy moon's surfaces and ambient space environment by sending the JUICE spacecraft to the Jupiter system in collaboration with ESA and JAXA. In my study, I uncover the age of subsurface ocean and energy transfer from the space to the subsurface ocean based on synergies of the exploration with space telescope observation and laboratory experiment.

The key for my study is space plasma surrounding the icy moons. Jupiter forms a huge rotating magnetosphere because of Jupiter's strong intrinsic magnetic field and rapid rotation. Space plasmas are headed and accelerated due to the electromagnetic energies stored in the rotating magnetosphere. The energized plasmas are irradiated to the icy moon's surface, where the icy surface materials are chemically changed. The irradiated materials are partly transferred to the subsurface ocean via icy plate tectonics, which are used for chemical reactions in the subsurface ocean, potentially including the biological activities. At Jupiter system, which is 5 times farer than Earth, the solar illumination gets 25 times weaker than at Earth. In contrast to the solar illumination, the magnetospheric plasma plays a role of a significant energy source in the space.

However, the transfer process of plasma energy from the magnetosphere to the subsurface ocean has been a big mystery because the largest size of magnetosphere in the solar system planets and plasma drastically changing over various timescales mimics the whole picture of the process. In addition, the solar wind, which is fast plasma flow from Sun, also frequently changes configurations of the magnetospheric plasmas, which also mimics the energy transfer.

We tried to uncover the energy transfer in the magnetosphere by utilizing the space telescopes that remotely visualizes global magnetospheric structures. We made the first-ever long-term continuous monitoring of Jupiter's magnetospheric plasma and polar auroral emission with a Japanese space telescope dedicated to the planetary science, the Hisaki satellite, of which development and operation I have been contributing to. By the Hisaki monitoring, we successfully captured the drastically changing plasmas in the magnetosphere. We also introduced the simultaneous observations by the world-highest resolution imaging of Jupiter's aurora with the Hubble Space Telescope and Chandra X-ray Telescope, which successfully visualized fine structures in Jupiter's aurora. The Juno explorer that was just before Jupiter orbit insertion observed the solar wind variations, which have been very hard to monitor from Earth, by the in-situ measurement just upstream Jupiter. Based on these coordinated observations, we uncovered the global energy transfer process in Jupiter's magnetosphere working as follows: 1. Electromagnetic energy stored in the outermost region of magnetosphere and is released under a certain condition, 2. The released energy accelerates plasmas, and 3. The accelerated plasmas are rapidly transported toward Jupiter. See press releases for details of the results (１，２，３，４). It should be noted that on the way of the discovered energy transfer to Jupiter, there are the icy moons, which likely receive the electromagnetic energy from the transferring plasma. 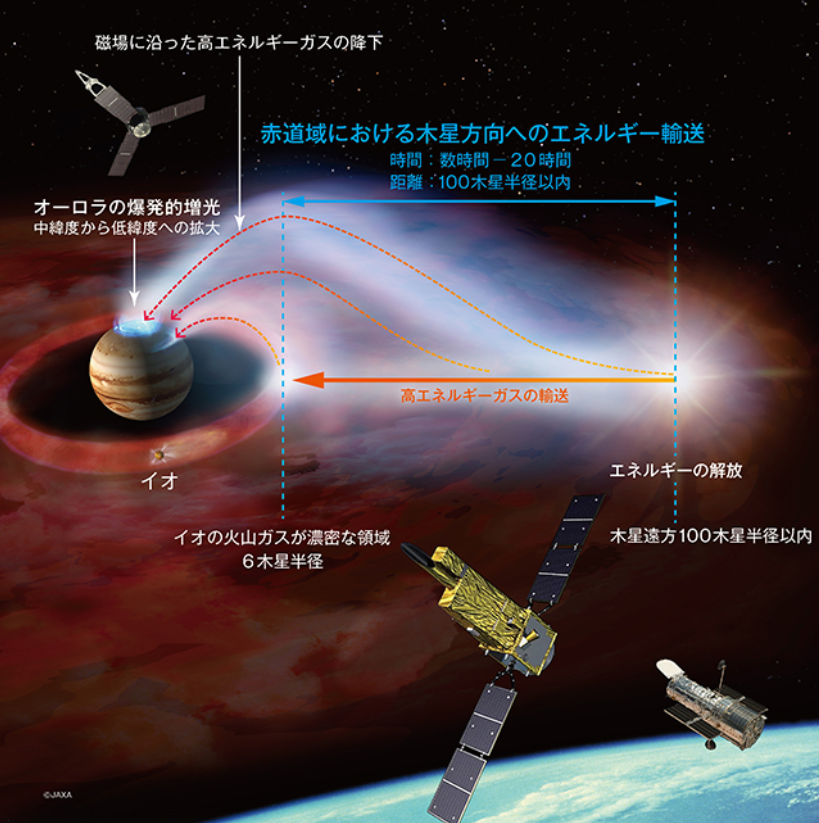 Press releases of our papers